There are several methods to remove the visibility of devices allocated to a server from a VMax3 storage Array. I am going to explain each one of these ways with the steps involved.

Reclaims can be broadly categorized into two types.

1. Full Reclaim - Remove visibility of all devices assigened to the server, generally after the decommission of server- In the above setup, remove both 00AAA and 00BBB

2. Partial Reclaim - Remove visibility of a number of devices- Remove only 00AAA

Consider Diagram-1 as the current setup where we allocated 2 devices to Server001 and below is the Autoprovisioning Group structure enabling the assignment from storage side. 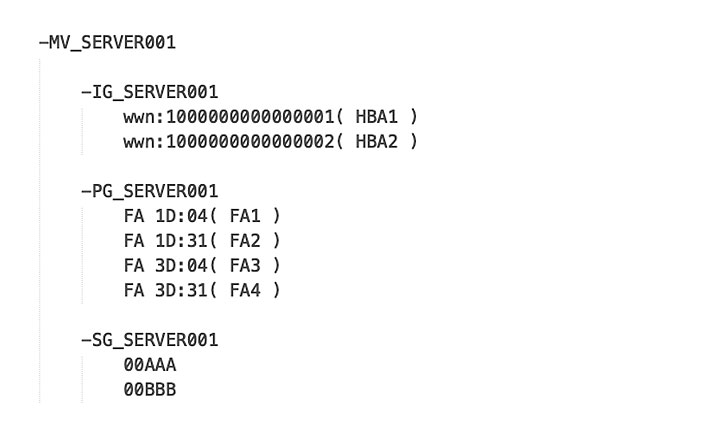 Let us see the methods that we can adopt to remove the visiblity of devices 00AAA and 00BBB.

This is the easiest method to quickly remove the SAN device visibility by keeping the entire Autoprovisioning Groups and connections intact. This can be very convenient to detach all the devices for a short period of time from the server. Reattaching the devices can be easily done by just adding the HBA WWPns to the IG again.

The HBA WWPns will still be logged-in to the zoned FA Ports.

Deletion of the MV is a primary step in the decomission of Server, from storage side. This will remove the bonding of Autoprovisioning groups - Initiagor Group, Port Group(PG), Storage Group(SG)- and make them independent entities.

The following command can be used to delete the masking view.

After the deletion, if you want to reassign the visibility, you can do it by creating the MV again by using the same IG, PG and SG.

The HBA WWPns will still be logged-in to the zoned FA Ports.

3.Remove zones from the active zonesets

In this method, we are doing the changes from SAN switch level rather than on the storage Array.

By removing ZoneA and ZoneB from the respective active zonesets delete the paths between Server HBA ports and Storage FA ports.

On the Array side , HBA WWPns will appear as NOT logged-in to the zoned FA ports.

We can shutdown the switch ports where the HBA ports are connected. In our setup we need to shutdown fc1/1 on both FabricA and FabricB switches.

This can be done through DCNM or command line.

Most of the times, the whole decomission procure includes all these steps- except removing of HBAs from IG- and physical removal of cables to the server.

Partial removal is done by removing the specified devices from the storage group by using one of the below commands. Other devices assigned to the server will remain untouched.

Reclaim of storage devices must be done with extra care. It can turn disastrous if not done properly. Each step need to be executed after multiple verification of respective commands and details.